Yesterday was my one-month follow up after the removal of my right implant. It was also two weeks since the seroma was drained and small stitched pulled. Yep, looking good. The seroma is no more and the post-stitch hole has healed.

The only thing that’s wonky is the scar on the left side. It is sunken in as if stuck to something inside. I have not seen this before and asked Dr. M if I could massage this issue away, to which he responded that I could sure try. Worst case, he can fix it later. I had same reaction to that as my hub did when I told him: nope, not doing that. No more procedures unless absolutely, without question necessary to finish reconstruction.

My objective for this appointment was to get a thumbs up for surgery sooner than April. Right now I’m on the schedule for April 9th, which is six months after the removal. During this procedure we are going to be placing a tissue expander on the flat side. I got what I wanted and can do it sooner. Mandatory wait of only three months (January), BUT Dr. M is booked solid, so there goes that. I’ll check in with scheduling monthly for openings. Fingers crossed!

Later this week I have an appointment to pick up my prosthesis. Hopefully it will fit well. I’ll update once I have it. Until then, photos of my current state and the wonky scar: 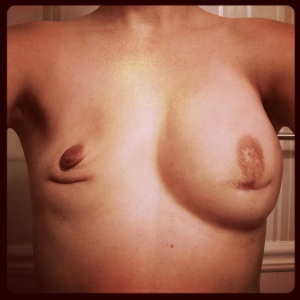 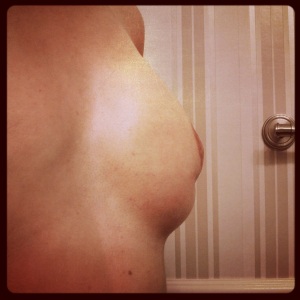 This day (Friday; surgery was Tuesday) was one of the first post-mastectomy happy days. Had the first follow up appointment with my plastic surgeon. I was up on my feet by this day, but not yet running laps around the neighborhood. We pulled up to the hospital and a nurse came out to get me with a wheelchair. I wore my beautiful Pink Passion recovery gown. 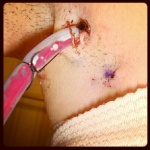 Dr. M noted that I was recovering nicely thus far. My drain output was very low on the two anterior drains (20ml/day each), so it was time to remove them. The sensation of the tube being pulled out was odd, but not very painful. The little pain I experienced was from the stretching of the hole in my armpit through which the tube passed. [Side note: I know the pic on the right is gnarly, but I gave you fair warning (top right of every page) that I include content that is NSFW/graphic, so deal with it.] The two posterior drain tubes were still kicking out about 60ml/day, so they were left in for a few more days.

The tubes serve a very important role during the recovery process: they remove the extra fluids your body produces as it heals itself around the incision and surgery sites. If those fluids are not taken away, seromas or hematomas can develop.

A seroma is a pocket of clear serous fluid that sometimes develops in the body after surgery. When small blood vessels are ruptured, blood plasma can seep out; inflammation caused by dying injured cells also contributes to the fluid. 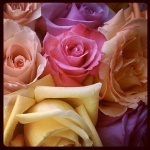 Roses from a dear friend

I was expecting to be doing a lot of snoozing because of the narcotics, but was very surprised by how awake, alert, and active I was immediately after my return home from the hospital. I spent a lot of time online – most often in one of the FaceBook groups (See: Resources), keeping friends up-to-date, writing thank you cards, walking around the house, and general random stuff. I found that if I settled in on the recliner and forced myself to calm down and close my eyes, I didn’t have any trouble sleeping, but overall I was not beat by any means.

I did post-op exercises from Casey Eischen’s program a few times per day. Each day it was a bit easier and I could do more.

2/1: Check out a more recent post about exercise and nutrition: Foobie Fitness

I was excited about Saturday, because I got clearance from Dr. M to take a shower! He even told me to wash my own hair. Who would’ve thought I’d be that ecstatic about bathing. More on that next. 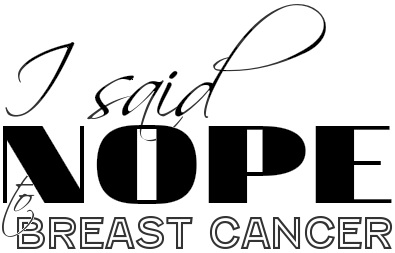