The final countdown has begun. T minus seven days until my exchange surgery! That’s right, just one week left. This will be surgery #8 in the mastectomy and breast reconstruction process, which started January 22, 2013. The goal is to replace the tissue expander on my right with a squishy implant. On one hand, I am very excited about this surgery, as it should be my last one. However, I am also incredibly anxious. This process was supposed to take about eight months and two surgeries. Here we are 2.5 years later with #8 on the horizon. I’ve experienced a few complications that have drawn it out and caused me a lot of grief. In any case, this time next week I will be home and it will be behind me. I can focus on healing and moving on with my life!

As I prepare for next week, I think about what supplies I need to gather. I’m dusting off the good ol’ Checklist that has helped me get my stuff together each time. I’ll be using the abbreviated version from my Box o’ recovery crap post, which lists the things I keep on the night stand:

That should do it.

I haven’t posted a photo since the tissue expander placement, six months ago. Slacker! My expansions went OK. That side is a different shape and size than my implant, of course, but not too bad. We stopped expansions at 450ccs, which is the volume of the implant on my left. There are a few things off at this point, like my nipples not being “level” and some weird divot in my cleavage, but honestly, at this point, I’m almost all out of fucks to give about these details.

So here I am, On the left in photo I am sporting a tissue expander in 450ccs. On the right I have a Mentor round, smooth, high profile, silicone implant in 450ccs (10 months after exchange). 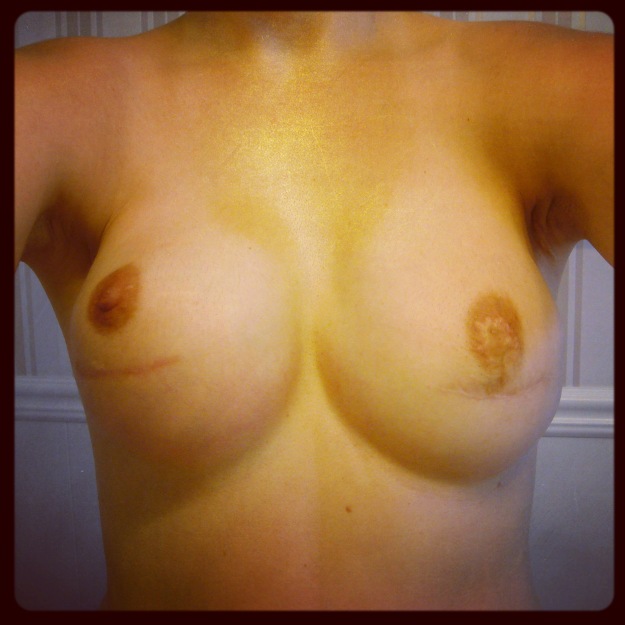 A few months after surgery I’ll evaluate the state of things and decide how much the details are bothering me and if there is anything else to be done. Maybe that divot will fill out (it’s OK in a bra) and the nipple-level thing won’t be as bad. Things will be different with an implant and maybe they’ll be symmetrical and just right.

One thing I know will definitely follow is a tattoo by Amy Black. I still haven’t decided if it will be just a 3D nipple fill or something artsy fartsy and covering more of my chest wall. We shall see!

It has been a month since my exchange surgery and over eight months since my prophylactic bilateral mastectomy. I went from about 184ccs of breast tissue pre-PBM, to 550ccs of saline in overfilled tissue expanders, to 350ccs of silicone gel in my Mentor round, smooth, high profile implants. 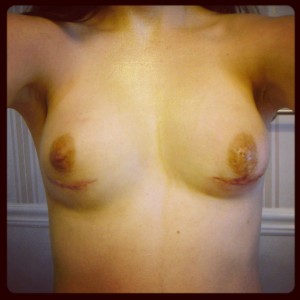 Not much has changed in the last month. I was hoping that the pocket on righty would close up a bit on the bottom, but that has not happened. This means I will most likely have a revision procedure this year to do that surgically. The new girls look fine in clothing, but I am not 100% happy when looking in the mirror. In addition to pocket revision, I am still planning on addressing the nipple asymmetry by removing the tip of the right nipple. I hope to wrap this all up by the end of this calendar year.

My scars are not pretty, but I already know I develop “two year” hypertrophic scars, so I am not surprised. I just started using Kelocote on the incision spots; hopefully this will help speed up their softening.

In other news, I just returned from a two week Europe vacation visiting Venice and my family; I’m excited to be participating in the local 2013 Race for the Cure on October 12th as part of Team FORCE (Facing Our Risk of Cancer Empowered – www.FacingOurRisk.org); and I was also recently featured in another article in the Fall 2013 edition of a local cancer magazine. Here’s my excerpt (changing names, because I want to continue to keep this blog anonymous):

“Mogatos says she never thought much about cancer until about ten years ago, when her 28-year old sister was diagnosed with breast cancer. In the intervening years, she’s had a great deal of time to think about it: she lost her sister to the disease, her mother was diagnosed with ovarian cancer, and another sister is undergoing breast biopsy.

Mogatos began having alternating ultrasounds and mammograms every six months to monitor her own breast health. She also had the BRCA test, which was negative. Once in a while she’d have an MRI, just to make sure everything was OK. Her doctor explained some women with breast cancer in their families choose to have a mastectomy, so she knew that was an option. But she was only in her early 20s, and “I was going along the lines of if it ain’t broke, don’t fix it,” she says.

In March of 2012, the time came to fix it. Mogatos picks up the story: “An ultrasound spotted some issues. Three separate masses were present. They had developed in the six months since the last mammogram. The oncologist recommended an MRI screening. Waiting for test results was hell, but when they eventually arrived, they were good – no cancer.

“In June, I felt something unusual during one of my monthly self-exams. The lump was in one of the three spots where the ultrasound found issues.” Another ultrasound confirmed that two of the three spots had increased in size and were now palpable. Mogatos had biopsies done, and again endured the terrible wait for results. There were some abnormal cells but no frank cancer. She was told to continue her self-exams and keep regular screening appointments. “The inconsistency of the messages I was getting was very hard psychologically,” she says. “I didn’t want to go through this again, having to wait for test results, feeling anxiety, then being relieved, and then ‘oops, maybe we made a mistake.’ I just couldn’t go through that again.” She began considering preventive mastectomy.

She was referred to Dr. M. “When I met him, we really clicked,” Mogatos says. “He brought up things no other surgeon mentioned. I talked to some of his other patients. I felt he’d be a great partner to get me through it.”

When the time came for surgery, she was ready. “I’d researched, I’d read, and I knew what to expect.” She was too lean for the DIEP procedure, so Dr. M placed tissue expanders, and a recent surgery replaced those with Cohesive Gel implants. “I’m ready to be done with the reconstruction,” she says. “It’s been sometimes painful, sometimes frustrating, but I’m so happy I did it. When I look at the big picture, the possibility of getting breast cancer and not making it through, like my sister, I have no regrets. It’s totally worth it. I never have to think about breast cancer again.”